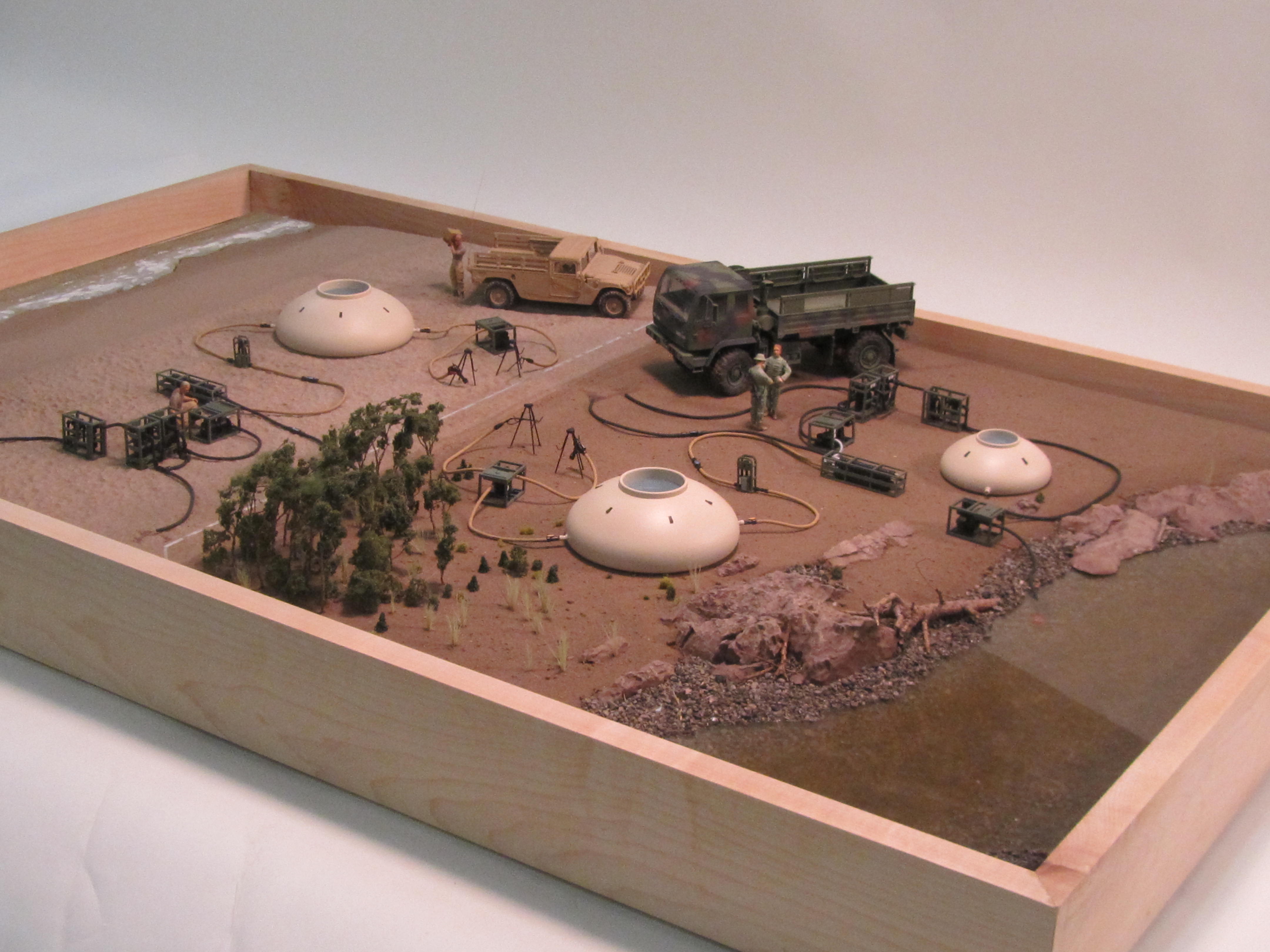 This diorama model features a company’s water purification product. Water is being extracted from both an ocean and river source, and purified for use in the field. The equipment in the diorama has been accurately scaled and placed in two realistic looking scenes for sales purposes. 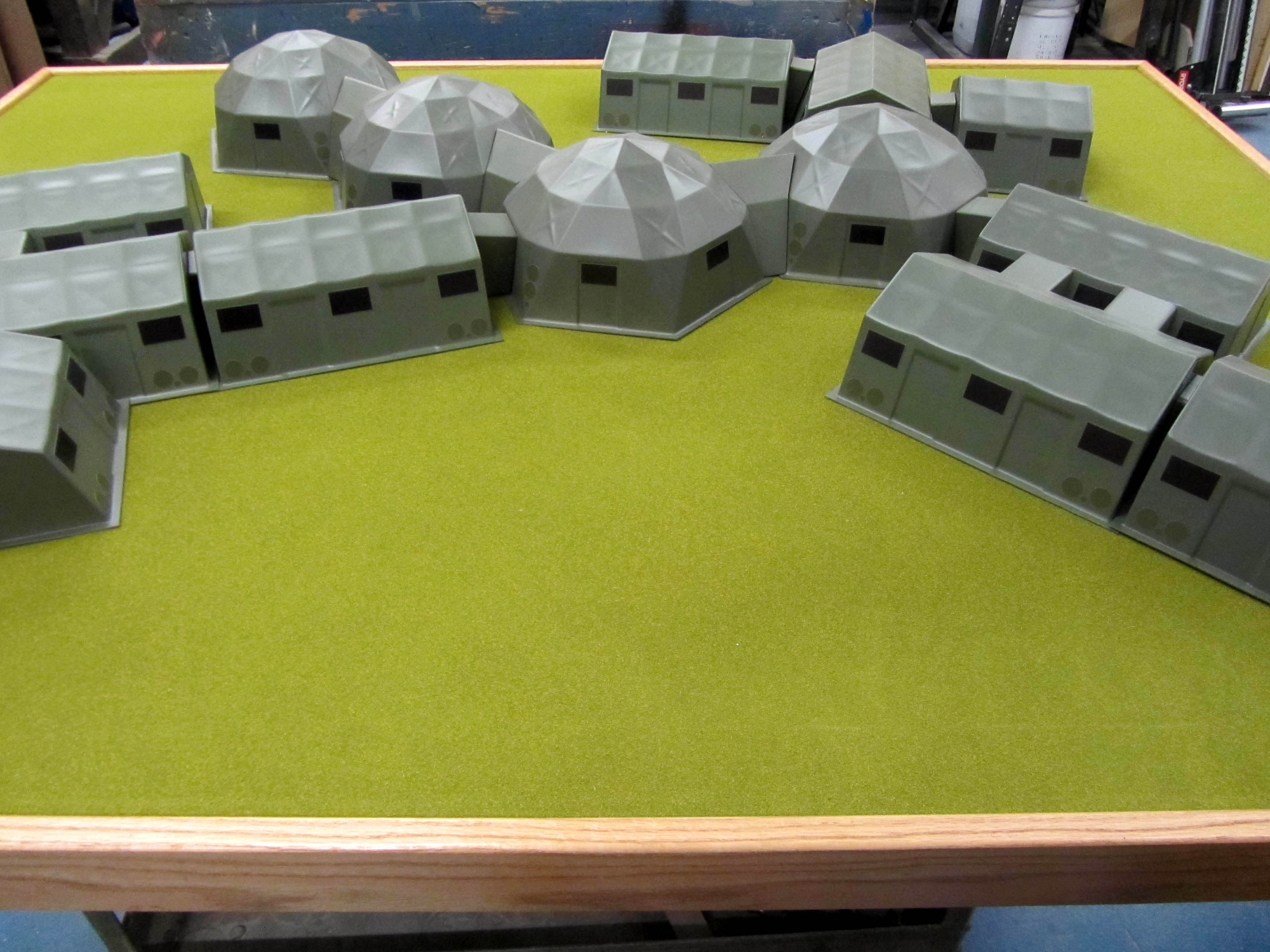 Recently KiwiMill was asked to make a series of tent models to depict a manufacturer’s product line. The models would be used as a sales and marketing tool, with possible trade show use as well.

Masters were formed on the CNC mill out of tooling board to represent three different tent designs. The tents all have metal frames with wire cross pieces and the idea was to show some of this detail on the model surfaces.

The tents were then vacuum formed using the 3 carved masters. Twenty of one design were made, and 10 each of the two other designs.

Tent connectors were made from stamped sheet metal. Five different styles were built. These connectors would attach to the tents by the placement of magnets in each tent. The idea was to offer the ability to reconfigure the tents and connectors into different layouts as needed.

Vinyl graphics were digitally printed and the tents and connectors were painted olive drab.

An oak trimmed  48″ by 60″ base was constructed with sheet metal underneath a grass mat. This way the magnetized tents would stay in place when configured, rather than slipping around.

The finished diorama can be added to, subtracted from and reconfigured using different tents and connectors. 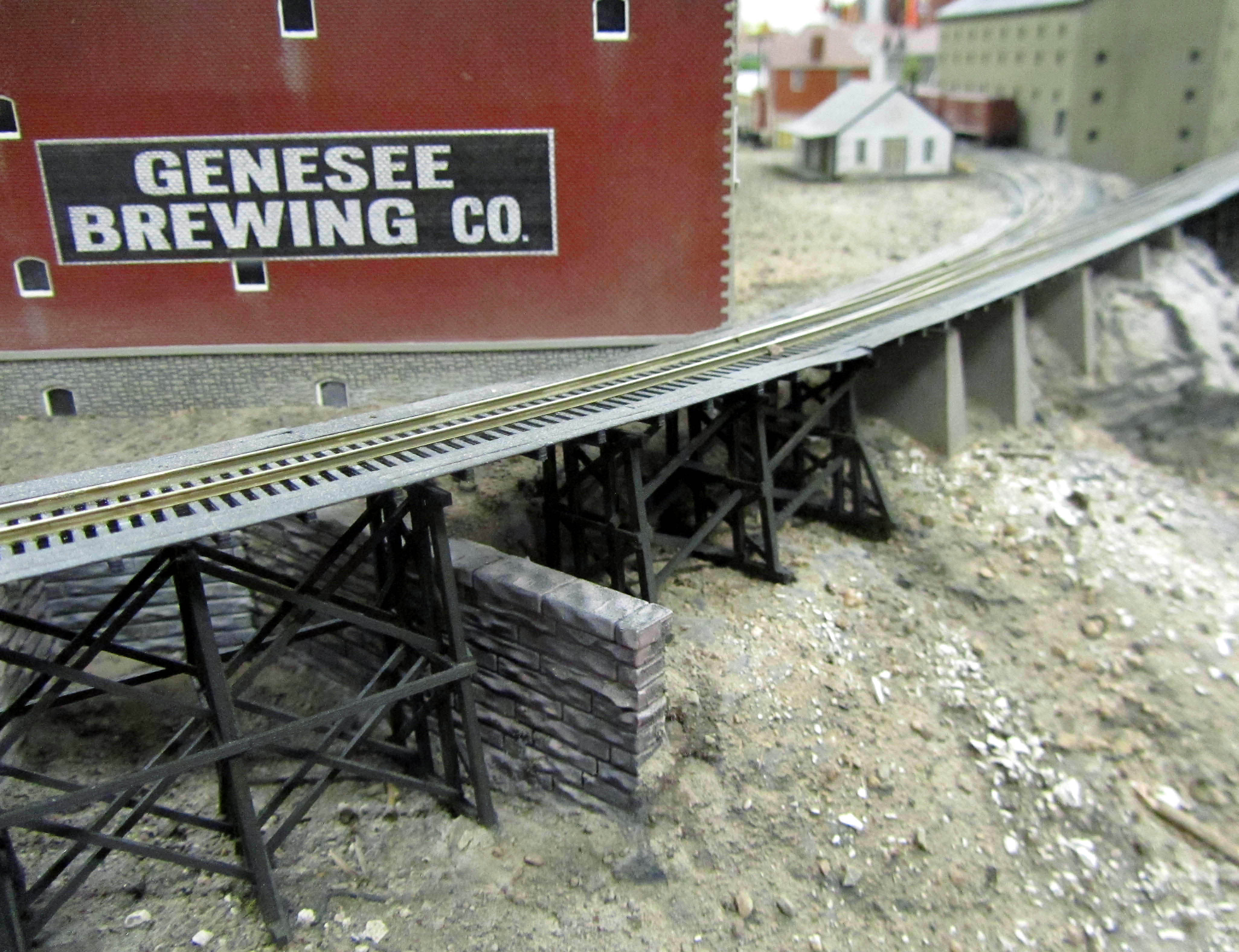 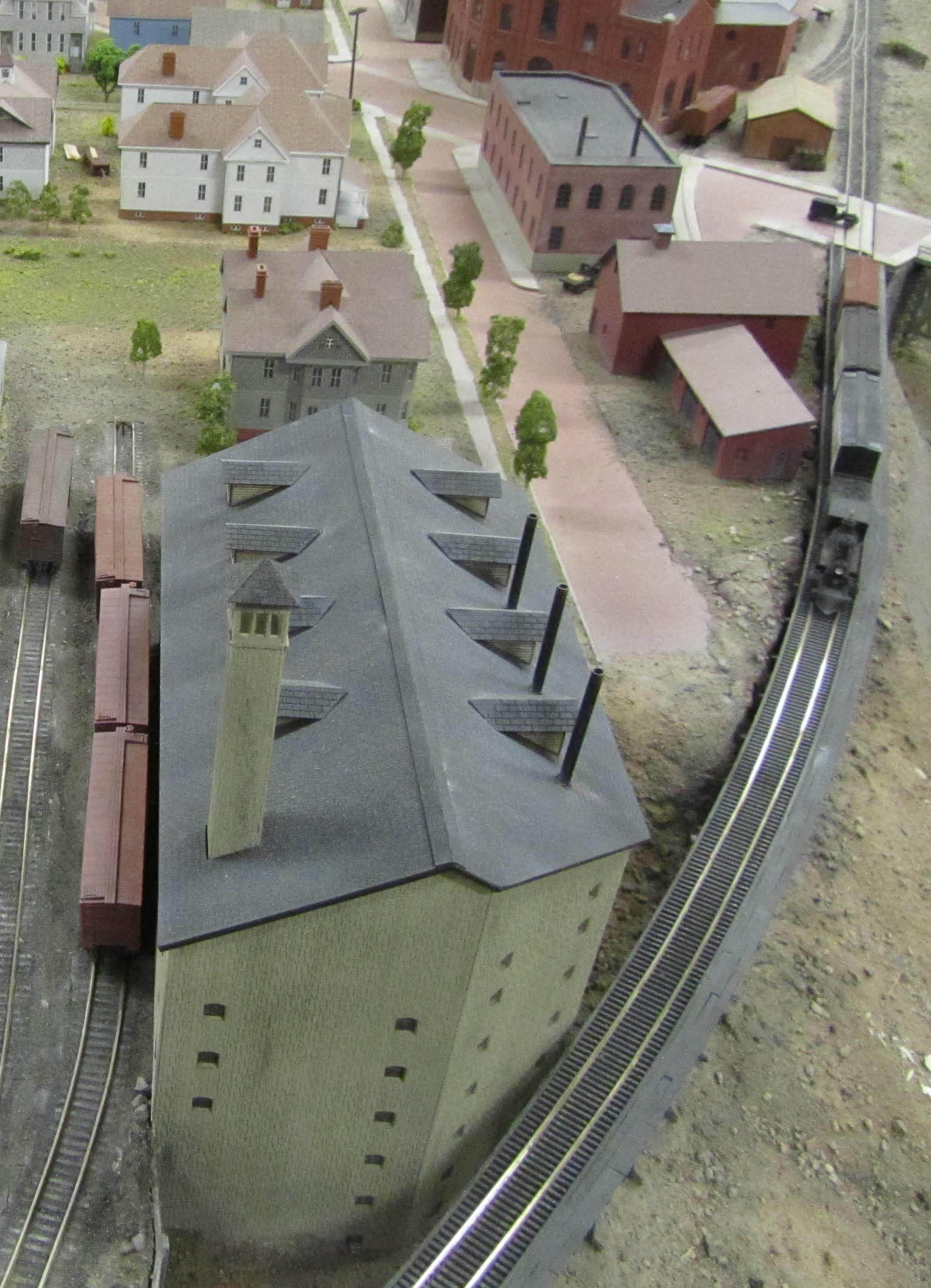 Recently I watched our model makers take perfectly crafted scale model buildings and purposely mess them up. My curiosity was piqued. Why painstakingly create a line drawing on the computer, laser cut it, precisely assemble and finish the parts into an architectural model, only to “dirty’ up its perfection?

It turns out that a certain segment of architectural models – historical models – are given what is called weathering effects. Why? The intent is to represent the impact of the elements on an object, in order to project the sense of time, and place, that a historical scale model must provide.

The artistic application of weathering techniques attempts to simulate – not duplicate – the natural ageing and wear process on the buildings, vehicles, roads, and other inanimate objects represented on a particular historical model. Things like dirt, grime, sun fading, paint wear, spills, stains and rusting, must all be scaled down to size using well honed modeling techniques.

In addition to developing specific methods for applying weathering effects, a model maker must do the historic research necessary to match the ageing process with the time period the model is attempting to capture. For instance, a train run on burning wood will leave markings that differ quite significantly from a coal powered machine.

Model makers can enhance their expertise at weathering models by studying the world around them – noting the textures, colors and formations of real life wear and tear . Once you pay attention you may notice that everything is subject to weathering – grass isn’t green, asphalt isn’t black, houses are different shades depending on sun exposure and vehicles have signs of use soon after they are purchased.

Our perception of the world is that it is much more brightly colored and distinct than it actually is in reality. Weathering techniques take a fully painted and detailed model and use filters, washes, dusting, and  other techniques to give the desired muted effect that more closely mimics real life. Signs of wear  like scratches, faded paint, rust and stains further enhance the effect.

It’s a fascinating process watching a model maker take a flawlessly constructed architectural model and add blemishes to it. In a historical scale model, it is this artistic application of ageing techniques that ties the display together and gives it life, and the feeling that it’s accurately captured a moment in time. 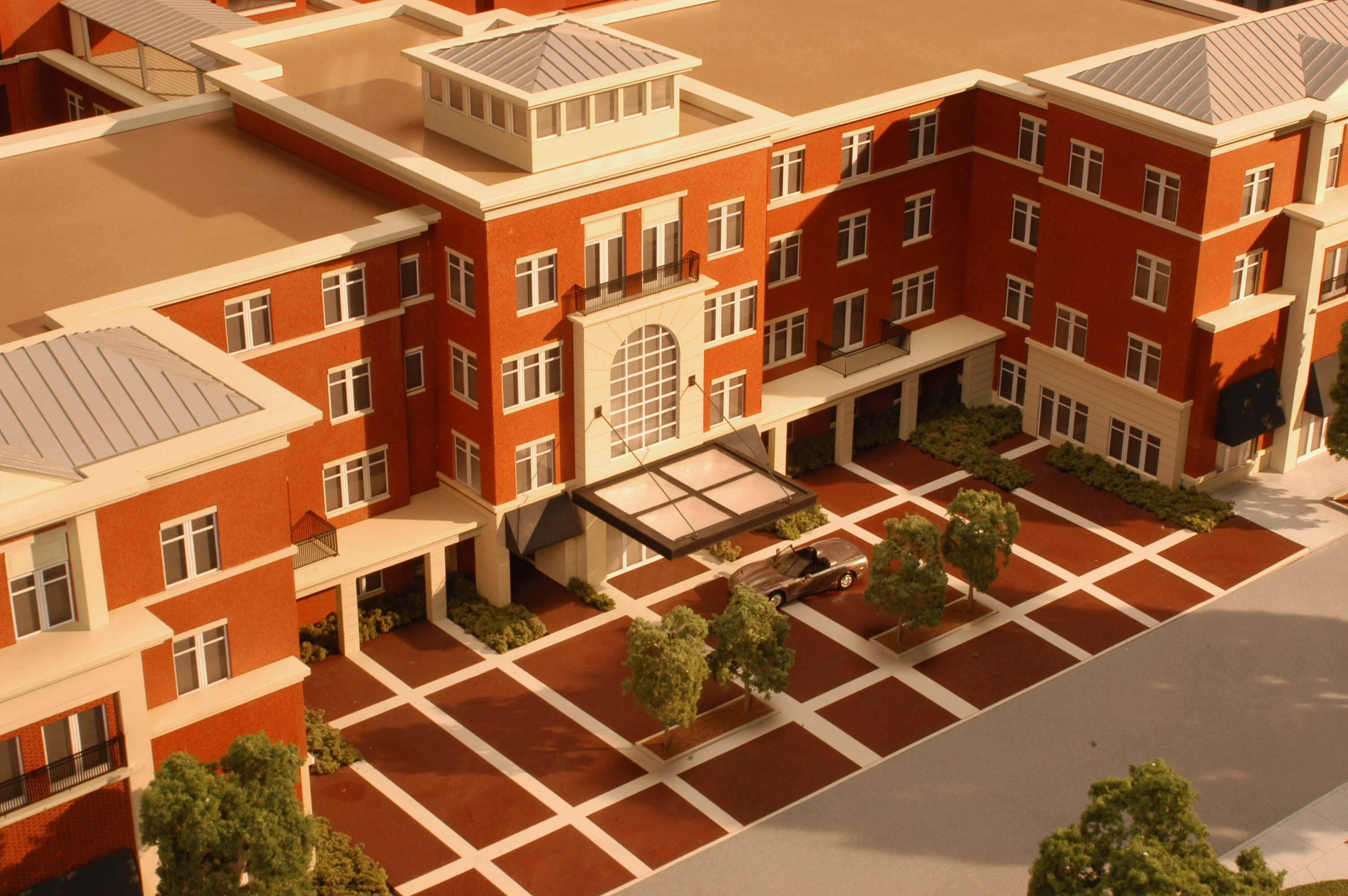 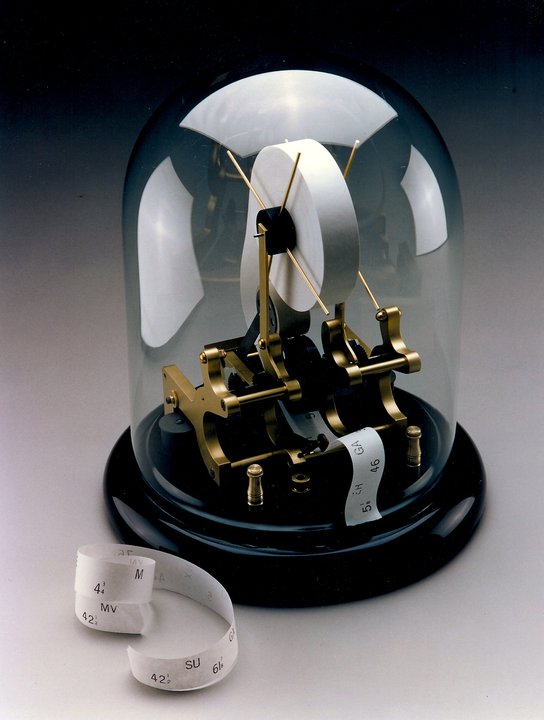 Did you know that there are almost 18 thousand museums in the United States? Are you aware that zoos are classified as museums? The American Association of Museums (AAM) lists the  following  types of museums on their website:

Did you ever wonder how they are funded? While many charge admissions, there are a fair number that are free-of-charge to visitors. Private charitable donations provide the largest percent of funding followed by admission charges (including gift shops and concessions), government funding (25%) and investment income.

The most obvious feature of a museum is the exhibits themselves.  While some museums are known for their collections of original artifacts, many more use reproductions, display boards, dioramas, props, scale models, interactive kiosks and hands-on exhibits to educate and entertain their visitors. Exhibit companies design these spaces to maximize a particular museum’s goals, and model making companies are often called upon to create the actual objects that go in these spaces.

The  International Council of Museums (ICOM) defines these spaces as “a non-profit, permanent institution in the service of society and its development, open to the public, which acquires, conserves, researches, communicates and exhibits the tangible and intangible heritage of humanity and its environment for the purposes of education, study and enjoyment.

Model makers pride themselves on providing quality museum models that will hold up to the high standards of these institutions.