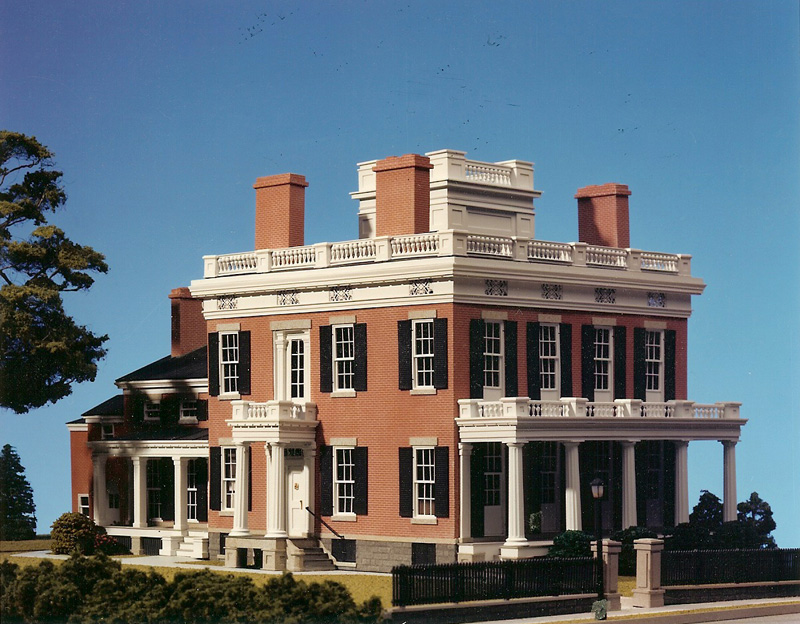 Back in the 1980’s, our model makers  were looking for an architectural model project to add to their portfolio, as well as a marketing tool. They looked around the community for an historic, architecturally elegant building that could be made into an impressive scale model.

The Landmark Society of Western NY gave a list of ten buildings it wanted to see immortalized in an architectural model. The Hoyt-Potter House in Cornhill was one of the top suggestions. Originally built in 1840 for the Hoyt family, then sold to the Potter’s of Western Union notoriety, this Greek Revival had fallen into deep disrepair over the years. The current owner wanted to mow over what was left of the foundation and build a parking lot in its place, but the City would not allow it.

Model Maker Scott Andrews studied the only known photograph of the house, visited the site and researched additional information on the house. From his research and measurements, an architectural model was constructed in 4 -6 weeks. It was presented to the Landmark Society for their temporary use and professional pictures were taken of it. The community began to take notice of this piece of Rochester history. The model itself generated interest, as well as the B&W photographs of the model which fooled many people into thinking they were looking at the real thing back in its heyday.

Developer Ben Kendig took note of the model photographs and became interested in the rehabilitation of the dilapidated house. The city did as well, and took possession of the home and sold the house to Ben for a dollar. Mr. Kendig turned to our model makers to find out where the building  plans were as they were needed for his architect. He was a bit surprised to find out that the model makers had gone off of one photograph and their own measurements. There were no plans!

Our model makers were then hired to go back to the site and take additional measurements of what was left of the original structure to assist in the rennovations. After taking these measurements and doing further research they drew up trim drawings and other architectural details that were used by the architects in the redesign.