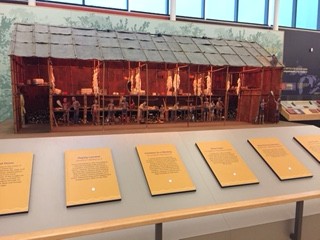 KiwiMill was honored with the opportunity to construct two major historical models for the Seneca Arts and Cultural Center this past summer. The Seneca Arts and Cultural Center is a newly installed interpretive museum located on the existing Ganandogan State Historical Site in upstate New York. This historical site was once the home to thousands of Native American’s known as the Seneca people. Here their vibrant community, traditions,and culture are conveyed by living Seneca people telling their own story of the past 2,000 years.

The Seneca Arts and Cultural Center includes a gallery space that houses two historical models commissioned by our client. One model is an 11 foot long longhouse and the other is an architectural site model of the Ganandagon property as it existed over 300 years ago.

These historical site models were an exciting endeavor for the model shop. Model makers typically deal with precision, scale and details in their building projects. However artistic sensibilities are crucial for museum model work and KiwiMill prides itself in the ability to blend these two aspects. In addition to model making craftsmanship and artistry, historical models require a great deal of research and collaboration.

The longhouse model needed to look realistic as well as be historically accurate. The large scale of the model (11 feet long) meant that the materials used for fabrication needed to be authentic and natural where ever possible. Real sticks were procured for the longhouse frame and were tied together with actual leather strips in a similar fashion to Native American construction.

The model blankets were hand woven.

The paper chosen for the bark walls needed to be the right weight, texture and opaqueness. The dyes used to color the paper were chosen to closely resemble Elm bark.

The sculptures of food had to be formed and painted with realistic detail. The furs used were chosen for their scale and texture. The weapons were made from wood and metal, just like the real objects.

Adding to the challenge, the longhouse would not fit through the gallery doors in one piece. It needed to be partially pre-assembled at the shop and then transported to the site. There the assembly needed to be finished in a short amount of time before the museum’s grand opening. All this needed to be done with out the use of artificial fasteners or obvious seams.

The longhouse included electrical wiring. Portions of the this historical model needed to light up as individual vignettes. The longhouse model has to integrate with the existing base at the museum and installed correctly so that each portion lit up when the correct button was pushed.

The longhouse model installed on site with figures added:

Up Next: Part 2 – Site Model of Ganondagan 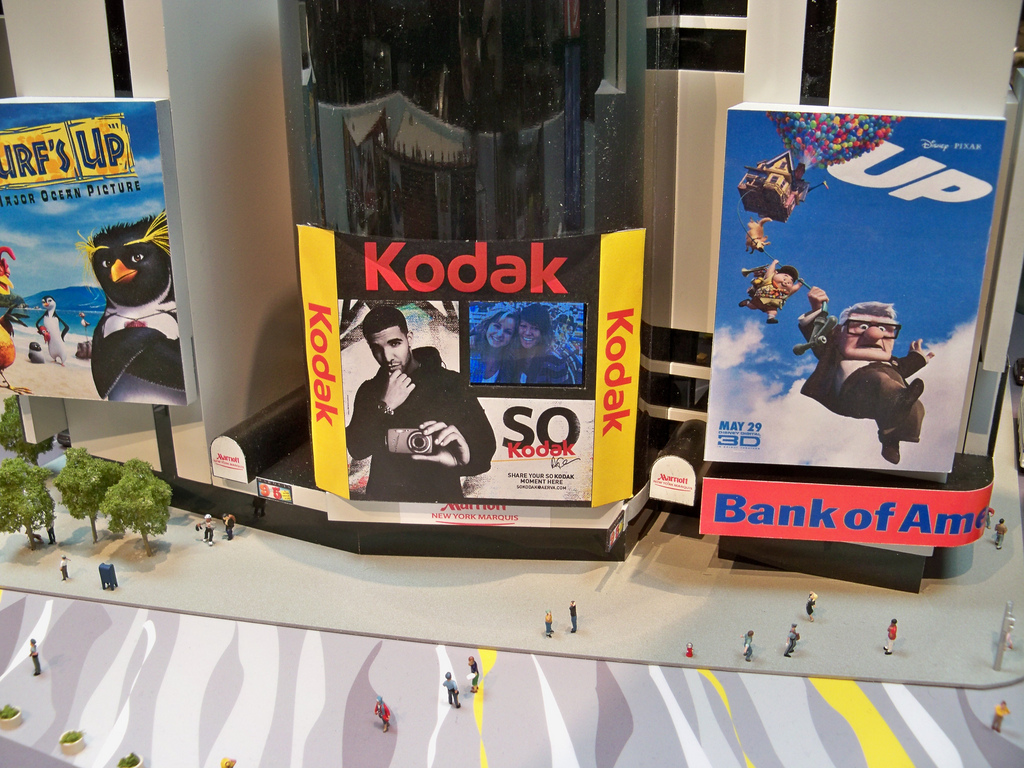 Interactive features on models help to draw customers to your booth, add excitement to a museum display, and can transform a model from a boring static display to the main focus of your booth or gallery. Kids and adults alike love creating the action or turning on lights in a museum diorama, or causing water flow with the flick of a switch. A trade show display model can be brought to life by adding lights, water, moving parts, or even a miniature TV.

In this post, I’ll detail some of the interactive and moving features KiwiMill has added to the various models we have made recently.

Miniature TV embedded into a Times Square Model
A trade show company came to us with ideas on how to add excitement to their trade show booth. The models were for CES, which is a consumer event, so first  people had to be attracted to the display and then were encouraged to pick up the cameras and take pictures using the zoom functions in order  to see the smallest details of the models. The TV in this model has a 1.8″ screen which was connected to a DVD player. This added movement and excitement to an otherwise static display model.

Computerized Asphalt Plant Model
This was a unique model for KiwiMill. Our client designed embedded controllers for asphalt plants and wanted to demonstrate the unique capabilities of their controllers on a working model. The client specified which parts of the model needed to function and KiwiMill created an interface to allow the model to animiate using their product. This model had numerous moving parts driven by motors and linear actuators.

Road Construction Truck Model
This road construction truck model is used to demonstrate the numerous features our customer built into their truck. Take a look at the video below and you’ll see just how many of these we were able to build into this model including sounds, moving parts, lights, arrow flashers, etc.

Working Hydroelectric Dam
This model was built for the U.S. government to demonstrate how hydroelectric power was created. It included a valve that could be opened to allow water to flow through a working turbine. When flow and turbine were activated, the sign on top of the turbine would light, simulating electricity generation.